Apologies for not posting for a few days. I've had a few internet connection problems over here.

Great run by Jez Bragg in the Western States 100. Third place is a fantastic result and under 17 hours is a great time too.
Posted by Chris Carver at 19:50 No comments:

Yesterday I travelled across the Peninnes to take part in a 5k race.  The organiser, Andy O'Sullivan, donated £50 to Orchid when he heard about my Run To London and he has since been wanting to meet me at one of the many races he organises.

In the Rochdale and Littleborough area he has organised hundreds of races over the past 26 or 27 years. They mainly range from 5k to 10k but are often around local reservoirs or in other scenic places.  They may not attract hundreds of runners - they are usually pretty basic (the race HQ is often a pub) - but the friendliness is always there.

Andy and I couldn't chat for long because, as race organiser, he was rather busy as you would expect.  Before the race though ... at the start line in fact ... there was a rather nice surprise.  He presented me with a boxed presentation salver. J ust like the picture but engraved with the words PRESENTED TO CHRIS CARVER FOR OUTSTANDING CONTRIBUTION TO ATHLETICS. 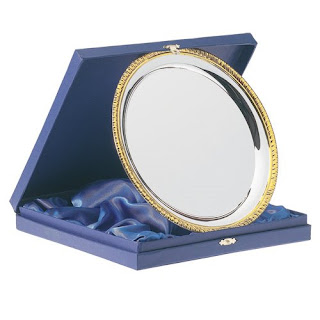 Not sure what I've done to deserve that but I handed it back immediately [to look after until after the race].

The race in question was the Ken Taylor Cowm Reservoir Road & Trail Race. As the name suggests, Ken Taylor of Rossendale Harriers was also being honoured 'for his outstanding contribution and for being such an inspiration'.  He is also having chemotherapy at the moment as he has cancer.  Cowm Reservoir is about three miles north of Rochdale on the Bacup Road.

Anyway ... the race.  Began with half a mile uphill then two laps of the reservoir then half a mile downhill. Simple really.  The strong wind didn't help at all though and the narrow paths made overtaking difficult in places.  Reached halfway in 10:10 feeling strong, out of breath and expecting to slow slightly.  At the finish I couldn't believe the time - 19 minutes 15 seconds.  That means I completed the second half in 9:05 (5:50 per mile).  No idea about my position.

This time represents an Age Graded personal best of 17 minutes 28 seconds.  Something I'm very pleased about as it came only two days after my previous race and not too long after the Run To London.  Speedwork seems to be working OK then.

Updated the Personal Bests page too.
Posted by Chris Carver at 17:12 No comments:

Harrogate League race 3 last night. Richmond & Zetland Harriers organised the 5.4 mile race with a big hill in the middle - it seemed like about a mile at 1:8 (12%). Lots of people were walking up the second half of this hill which always seemed to promise to end just around the next bend.  Lots of broken promises in Swaledale last night but I was pleased that I managed to run to the top.  The weather was rubbish too ... wet and very windy.  Scenery was OK, as was the generally downhill finish.

I guess you could say it wasn't my favourite course and I'm not sure whether to be pleased with my time or not ... 37:58

Ran 6+ miles first thing this morning.  It was still very windy and my legs were a bit tired but I was pleasantly surprised at how quick it was without trying.

All the best to Richie Cunningham who's running the West Highland Way Race tomorrow - hope the weather's kind ... and for Alan Young too (he'll be there taking loads of photos).
Posted by Chris Carver at 19:20 No comments:

Just secured sponsorship from the UK distributor of Shotz nutrition. They have agreed to provide electrolyte tablets, energy gels and energy bars.


I have been using Shotz electrolyte tablets for the past couple of years now and they are very good at providing all my electrolyte needs for a 24 hr race (or even a 45 hour race recently !!!)
Check out the product here or here

Posted by Chris Carver at 18:26 No comments:

At our 'reunion' on Sunday all of the people there suggested they would give up another weekend to help me on another fundraising adventure.  While it's wonderful to have that level of friendship and respect - especially from those helpers who were complete strangers four months ago.  I'm completely humbled by all that but ...

Well I thoroughly enjoyed myself that weekend so I probably will do some other fundraising run BUT NOT UNTIL 2011 AT THE EARLIEST.

There are four reasons for giving it a two year rest (minimum):

(1) it would be unreasonable to ask for the same level of donations and support every year
(2) I need to consider other ultra races I may be interested in
(3) I firmly believe that to raise money for charity by 'doing something' you have to be 'out of your comfort zone'.  This means it could take a while to decide exactly what to do, and then there's all the planning and organising (and that's worse than the training ...)
(4) I need a twelve month break from all that stuff

In the meantime if anyone has any ideas please let me know.
Posted by Chris Carver at 16:21 No comments:

Email ThisBlogThis!Share to TwitterShare to FacebookShare to Pinterest
Labels: fundraising, Run to London

Yesterday I met up again with seven of the people who helped during the Run To London and we all had a good time refreshing our memories of the whole weekend.

In my case some of the holes were filled in.

Thanks to everyone who bothered to send an email recently after reading the report.  It seems that you all enjoyed reading it and I certainly plan to re read it every once in a while to remind myself of the '45 hours of madness' which was one of the greatest adventures of my life.

A couple of people recently have suggested I write a book.  I know that I do a lot of writing and I have worked as a journalist but a whole book is a bit daunting.   It will need a lot of thought first.

In general my recovery has gone very well so far with not even a minor illness or ache/pain any more.  Back to a normal training schedule now but at a reduced level (only 50 miles this week).
Posted by Chris Carver at 14:08 No comments:

Email ThisBlogThis!Share to TwitterShare to FacebookShare to Pinterest
Labels: Run to London

My job was recording finishers' numbers.  The first time since 1998 that I've actually had a specific job to do.  So, I stood in the drizzle for 40 minutes or so shouting out numbers while Hugh Pearson wrote them down.

From what I could see everything went well.

Photos, results, etc available on the Otley AC website.
Posted by Chris Carver at 20:06 No comments:

I Hope you all enjoyed reading the account of the Run To London. Some of the photos, I think, are excellent but my favourite is the one below which was taken by Huw Illingworth. I'm on the right and Andy McMenemy is on the left. I'm not sure if anyone will understand why this photo means so much to me but I'll try and explain briefly.

In the photo I've just completed 300k in over 39 hours and on I go into the night with Andy in tow. It was well after midnight and I was feeling low at this point ... but still I plod on.

I think Huw just captured the moment without thinking about it too much - he must have been exceptionally tired at this point too having been on car duties for (too) many hours.

Anyway, that inspirational photo is now firmly installed on my PC desktop. 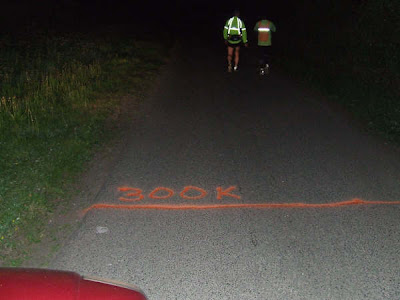 Training now begins in earnest for the Commonwealth 24hr Championships in Keswick on 17/18 September. The plans have all been written and, on average, I aim to run about 6 - 7% more miles per week and be on the bike three times a week instead of twice. Strength training will probably be about 10% less than last summer but hill reps will make up the difference hopefully.

Official selection date has now been put back to Monday 29 June 2009 although as I already have the 'A' standard from last year's Tooting Bec race I'm very confident of being selected.

I've also got some shorter races planned - they can be viewed over on this page.
Posted by Chris Carver at 15:43 No comments:

Also updated the section in the sidebar detailing my ultra personal bests in brief.

All this needed doing after a successful Run To London almost two weeks ago now.
Posted by Chris Carver at 14:28 No comments:

Started planning my training for the next 15 weeks which will take me up to the Commonwealth Championships.

It will basically be the same mix as usual: two long runs per week along with fartlek, hill reps and tempo runs. The long runs will not be quite as long as they were in the lead up to the Run To London. I'll also be doing the usual cycling, stretching and strength exercises - perhaps a bit more than before.

I'm going to try and make more time over the summer for a regular footcare routine and also proper recovery time where I'll just chill out every now and again in a stress free environment.

Will probably do one or two races as speedwork in July and August and I plan to run a quick 100 miles at the Hull 24 hr race in mid July.

For the past 18 months I've been running three consecutive days then having a day recovery - perhaps now is the time to increase that to four days on and one day off.
Posted by Chris Carver at 15:17 No comments: